What would a site called “WORTHOG” (or “WORT-HOG” because WORTHOG was taken) be without some mention of beer? “Wort” is unfermented beer, and fermented beer happens to be my favorite drink. “Hog”…well, I do love pork. Especially when it’s in a nice bowl of ramen, a slice of nice bacon, or a mean enchilada. (With a big bowl of frijoles! Oh God how I miss comida Mexicana.) But I digress. Suffice it to say that I didn’t misspell “warthog”, or that I did so intentionally. You decide. 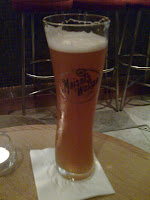 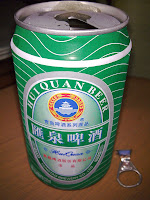 Anyway, beer. My current favorite western restaurant in HK serves three interesting beers on tap, Budvar (the real, and better Budweiser), Maissels Weisse in an oversized glass, and a third whose name I don’t recall. The beer I’m drinking in my apartment for the last couple of weeks is called HUIQUAN, and old timers will recognize the very, very “old school” pull tab next to the can.

Back to the other “WORTHOG” Blogger site. It is taken by some young Japanese kid who has two posts in three years. I love his two posts. So much said in so few words. I wonder what his story is?

Searching is in progress